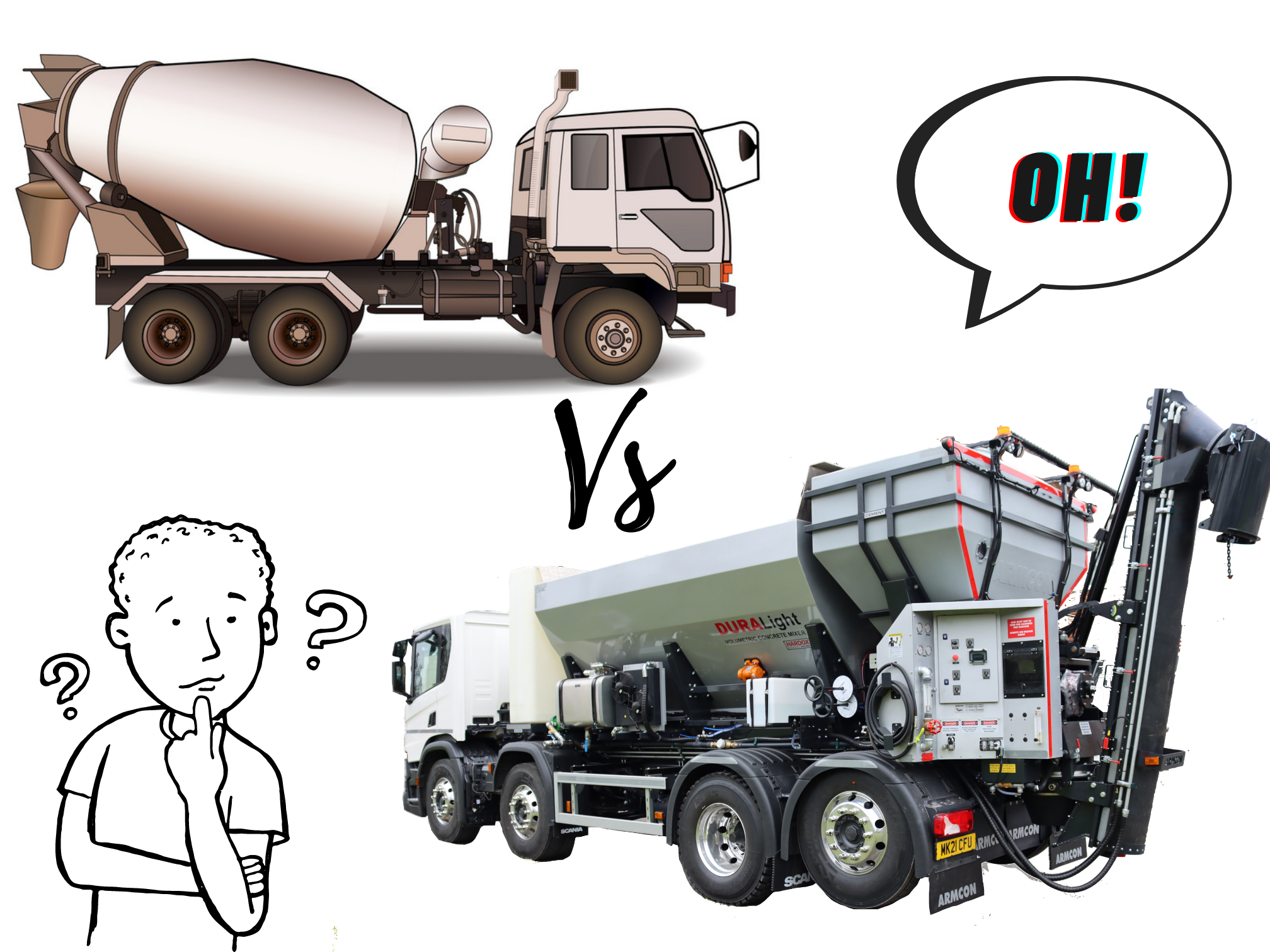 The percentage of ready-mix concrete delivered by volumetric mixers continues to rise each year and since it’s one of the few industries to experience a boom during the Covid-19 pandemic, the concrete industry in 2021 is looking better than ever. So, it’s clear that volumetric concrete mixers are becoming more popular and if you don’t have one already, you’re probably wondering why you should invest in one…

What is a volumetric concrete mixer and how does it work?

A volumetric concrete mixer, sometime referred to as a mobile batching plant, is a vehicle mounted machine which holds each of the constituent materials for making concrete separately, and then mixes them together to produce fresh concrete at the job site. Aggregates are stored in a large hopper, which has a central divider allowing coarse and fine aggregates (stone and sand) to be held separately. Beneath this hopper is a conveyor belt which delivers the aggregates to the back of the machine where the mixing takes place. The amount of aggregates being delivered is controlled with strike off gates. Cement is stored in a sealed container at the rear of the machine to prevent exposure to any moisture and is delivered to the mixing area at a constant rate via a screw auger. Water is stored in the large translucent tank at the front of the machine and is pumped via a flow meter (which can be used to adjust the flow rate) to the mixing area.

The mixing auger is what blends all of these materials together, mixing the materials together and moving them along the auger at the same time until fresh concrete is delivered from the end of the auger assembly.Typically, the production usually takes around 5-10 seconds before the concrete is discharged from the chute.Chemical admixtures can be delivered in the same way as the water, and each admixture has a dedicated tank, pump and flow meter.

So why buy a volumetric when you can buy a drum mixer?

I bet you’ve seen the ‘only pay for what you use’ signs on volumetrics, and one of the main advantages is simply that. A volumetric mixer only produces as much concrete as is needed, whereas the drum mixer carries a pre-determined amount of concrete produced at the batching plant – and unless they are delivering a complete load there is a good chance of either wasted material or insufficient supply. Because of this risk drum mixers often result in part load charges or wasted materials charges if a small load or incorrect volume is ordered, and inexperienced customers are particularly susceptible to these costs – however with a volumetric the customer only pays for the concrete they use, and wastage is completely eliminated. The other difference is that the drum mixer can only carry one mix design at a time, and there are limited changes which can be made to the concrete once it has been produced at the batching plant. This differs to the volumetric mixer which can produce any mix design from the raw materials being held on board, as well as being able to alter the consistency during the pour to suit the conditions. Jobs which were previously not possible with a drum mixer because of distance from the nearest batching plant are no longer an issue with the volumetric either.

Another key point is that because a volumetric mixer is essentially a mobile batching plant, aside from a way to load your raw materials it is the only piece of equipment needed to get you making concrete. Compare this to a drum mixer which needs a separate batching plant to make the concrete, and the entry to market is significantly less expensive with a volumetric than with other mixer types.